Epic Apologies For Fortnite Downtime With A Free Crescent Shroom Pickaxe, Here’s How To Get It

The Fortnite servers were recently down during their major holiday event. This downtime prevented players from earning extra XP and acquiring one of the Fortnite holiday gifts. Epic Games will be making it up to Fortnite players with the Crescent Shroom Pickaxe and a Power Leveling Weekend. Here is how you can get your hands on the Crescent Shroom Pickaxe and what you need to know about the event.

Fortnite players can pick up the Crescent Shroom Pickaxe on January 7th at 7pm ET. Players must have logged in during Winterfest to be able to receive the Pickaxe, but there are no other qualifications. Players who did not log in during the Winterfest will be able to purchase the Pickaxe at a later date. There is currently no information about when it will be available for purchase or how much it will cost.

There are no official images of the Crescent Shroom Pickaxe. However, dataminers have naturally uncovered at least one image. The Pickaxe will likely be silver and, unsurprisingly, have a crescent-shaped blade. 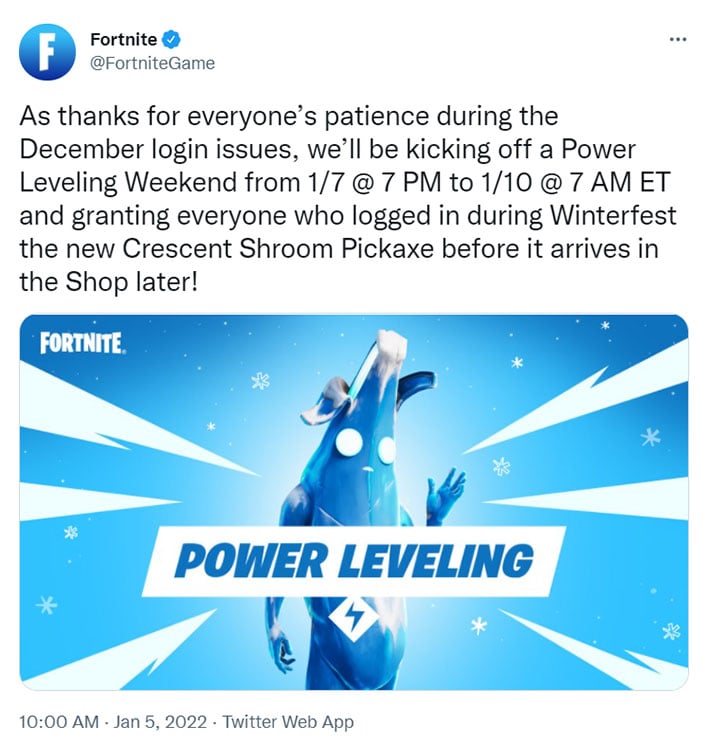 Fortnite servers were down for roughly five hours on Wednesday, December 29th. Players were unable to log-in and received the message, “You do not have permission to play Fortnite.” The Fortnite Status Twitter noted once the servers were back online that they would soon update players on “what we’re doing to help you make up for lost time.”

Winterfest started on December 16th and ran until this morning. However, many players were frustrated because the down time occurred during many players’ winter break. Players were also promised a total of fourteen presents during the event and some were unable to receive one of the fourteen.

The Crescent Shroom Pickaxe is only one part of Fortnite’s apology. There will also be a power leveling event this upcoming weekend in which players will gain additional XP while completing their usual activities and objectives. This event is to make up for the fact that players were supposed to be able to earn extra XP during the Winterfest event. Power Leveling Weekend will begin on Friday, January 7th at 7pm ET and go until Monday, January 10th at 7am ET.

The reactions to the Crescent Shroom Pickaxe have been mixed. Many players especially find the pickaxe to be underwhelming and are not particularly excited about the Power Leveling Weekend. Others argue that players should just be grateful that Epic Games is giving them anything to compensate for the lost time.